The Premier League has been running since the 2006/2007 season when Divisions 1 and 2 were launched, and was expanded for the 2010/2011 season with the introduction of Division 3.  Premier League Netball is the highest level of club netball in the country and the teams that make up the 3 divisions have come through a gruelling county, regional and national pathway to take one of the coveted 30 places.

The Champions of Premier League 2 and 3 each season automatically gains promotion into the next league up, whilst the team at the bottom of the league table in Division 1 and 2 is automatically relegated to the division below.  Playoffs between Divisions 1 and 2, and 2 and 3 determine which league each team will play in for the next season, whilst the winning teams from each region meet the bottom three from Division 3 in a playoff weekend to decide who will take their place in the National League and who will return to their Regional leagues. 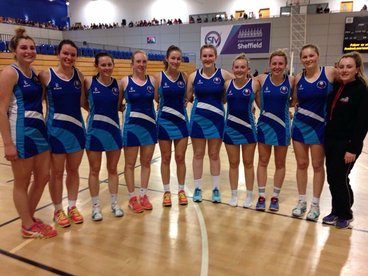 The Qualifying Tournament was held on Sunday, May 15th 2016 in the Sir David Wallace Sports Hall at the University of Loughborough.

There were 6 entries, three from Lincolnshire, two from Leicestershire and one from Derbyshire.
​
Matches were  closely contested with some very tight results and a good deal of noisy support from spectators. Despite tremendous efforts from the other teams the two teams relegated from Division 3 last year fought their way back with Pennine the eventual (undefeated) winners and Sleaford Barge the runners up.

Charnwood Sapphires will also be joining Division 3 as their first team successfully gained promotion to the Prem League today, leaving a gap for teams to move up.

We welcome them all to the league for next season.