Jackie Milsom (Stapleford, Derbyshire & Loughborough Lightning, Leicestershire)- Jackie has been actively involved in Netball within the East Midlands over a number of years. Across each of her volunteer roles over the years, Jackie has always been reliable and dependable, never once letting anyone down on any commitment. A number of people have commented on how much of a pleasure this lady is to work with; her positive and motherly disposition and manner makes everyone feel cared for and valued. This year she has completed her 10th season with our franchise Loughborough Lightning and we wish her the best of luck in supporting Lightning to achieve a top 4 finish next season.

Ursula Hammond (Cliftonettes, Nottinghamshire)-  Ursula has been involved with Netball for over 40 years as a player, umpire and coach. To name just a few of her contributions to the sport, Ursula has helped develop school netball hugely within Nottinghamshire, and she founded Cliftonettes Netball Club in 1975 which has grown to over 200 players. Her priority is to make netball available to everyone regardless of ability: she has coached and supported several girls with special educational needs, and has coached Browne Jacobson, for the last 5 years with endless patience! Congratulations Ursula.

Donna Beckett (Derbyshire)-  Donna has devoted herself to the development of officiating in Derbyshire and the East Midlands.  She is an umpire, a mentor, a tutor and an assessor, County Umpiring Secretary and a member of the Regional Officiating TSG.  Donna works across all age groups, but especially focuses her attentions on helping young umpires develop and move along the England Netball Officiating Pathway. Not only did she win the National Goalden Globe Grassroots Official Award last year, she was also a finalist in the Sport Officiating UK Awards nominated in the Official Coach/Mentor of the Year category. Her commitment to Netball is outstanding.

These awards were preceded by a superb main course before moving onto the East Midlands specific Awards. The first of the Regional Awards to be presented was the ‘Jean Bourne Back to Netball Award’, which was first introduced in to 2012 for a Back to netball participant whose personal lifestyle has changed significantly since becoming a ‘back to netballer’. This Award was presented by Robin Bourne and Yvette Corton on behalf of their late mother who sadly passed away after a long dedication and passion for the game. For 2015, this was awarded to:

Melanie Finch (Forest Bows & Arrows, Nottinghamshire)- Since joining England Netballs Back to Netball programme, Melanie has grown in confidence and become an inspiration for other women. Over the past couple of years, she has qualified as a Level 2 Coach and recently passed her C Award Umpiring course. Aside from coaching Back to Netball and creating new Back to Netball teams, Melanie has also thrown herself into the Nottingham City Back to Netball Committee as Vice Chair.

The second Regional Honour presented, this time by Regional Chair Sue Collin, was the ‘Jean Staley Award’. This award is given to celebrate the memory of the late Jean Staley, who was dedicated to all aspects of Netball. The winner this year was:

Vanessa McErlain-Naylor (Brigg & District NC, Lincolnshire)- Vanessa goes above and beyond for her Club, County and the Region… some people would even argue for 2 Regions! Vanessa is the Chair of her Club & County; she is her County’s Academy Coach; she supports the Region by sitting on the Performance TSG and by coaching the Regional Athletes when requested by Sam Brightman, our Performance Pathway Coach. Vanessa goes out of her way to enhance the experience of everyone involved in Netball, whether it is players, coaches, umpires or volunteers.

The Teacher Award: Rita Stewart (Blisworth C P School & Northants JMs, Northamptonshire)
Presented by: Kelly Washington (Chair of the Performance Technical Support Group)
Rita has made an outstanding contribution to Netball through delivery in an educational environment as a volunteer for the past 21 years. She has ensured that netball is accessible to all children, including ex-pupils, by providing numerous opportunities for them to get involved at all levels. To quote one ex-pupil, a current member of the Regional Performance Academy- “I hope to one day play for England, and if I do it will be Mrs Stewart I will be thanking for her impact on my netball career, as if I hadn’t met her I don’t think I would be playing netball now. She has always encouraged me, supported me and still continues to do so. I honestly think I am where I am today because of Mrs Stewart.”

Muriel McNally Award: Mary Yardley (Stilleto NC, Derbyshire)
Presented by: Olivia Murphy (Loughborough Lightning, Assistant Coach)
Mary has dedicated over 10 years of outstanding contribution to netball. Not only has Mary volunteered for many years as an umpire, a league organiser, a team manager, a County Chair, and more recently as a Regional TSG Chair; Mary has developed a network of volunteers around her, and has created a family feel to the organizational structures she once chaired. It has to be said that Mary’s biggest triumph is the success of the League she established back in 1993, which is quite rightly named after her.

Mary Bullock Administrator Award: Debbie Hopkinson (Allestree NC, Derbyshire)
Presented by: Liz Alsop (East Midlands Netball, Regional Treasurer)
Debbie has been actively involved in Netball for over 10 years. She is treasurer of her own club, and for the past 10 years has supported the club and its coaches in all capacities from funding to organizing trips and competitions. In 2012 she took on the role a Performance TSG Lead for Derbyshire. Debbie’s knowledge of databases and budgets is wonderful and she shares her good practices with not just the group she is leading but other TSG Leads.
Unfortunately Debbie could not attend the awards, so Paul Hardy (Allestree NC), collected the award in Debbie’s absence.

Grassroots Coach Award: Claire Annall (Sleaford Barge, Lincolnshire)
Presented by: Karen Atkinson MBE  (Loughborough Lightning, Head Coach)
This category was highly contested with 13 nominations received for 9 coaches. This year’s winner, Claire, has been involved with coaching for the last 24 years. She continues to support her club players to excel in County, Regional and National competitions, whilst supporting with the development of new players through the clubs Back to Netball section. This year Claire has guided her club’s U16s team through an undefeated season in the U16 Lincolnshire Netball League, allowing them to reach the National U16s Clubs Final.

Unsung Hero Award: Rose Bond (TFC, Leicestershire)
Presented:  Sue Collin (East Midlands Netball, Regional Chair)
Rose beat 10 other nominees to win this prestigious award. Rose’s passion and commitment to her club, county, region and the sport is awe-inspiring. She been involved in netball since her two daughters were old enough to throw and catch! Over the past 21 years, Rose has been a club scorer and timekeeper, a County Squad manager, a league secretary, a league and county committee member and a whole support network and the glue in holding a club together. Rose is described as the 8th player of the team and the club rock.

Grassroots Official Award: Robyn Rogers (Fenland NC, Lincolnshire)
Presented by: Heather Gleadall (Chair of the Officiating Technical Support Group)
Robyn works exceptionally hard to not only develop her own umpiring skills, but others’ too. She has helped to develop and run an ‘Introduction to Officiating’ course as well as developing a 6 week intensive mentoring course within Lincolnshire. Robyn is always one of the first to volunteer for any Regional umpiring requirement; she has also umpired at National Schools, National Academy Screening and at a Disney Tournament. Robyn also sits on the officiating TSGs at both County and Regional levels.
Unfortunately Robyn was on holiday so was unable to collect her award in person, but she did join us through the wonders of FaceTime, assisted by the lovely Kate Stephenson.

Young Volunteer Award: Claire Dickenson (Cliftonettes, Nottinghamshire)
Presented by:  Mary Yardley (Chair of the Volunteer & Club Development Technical Support Group)
This award was presented to Claire for her outstanding contribution to the sport. Claire coaches, umpires and manages netball teams within her club and local primary schools. Despite only been 18, Claire is mature beyond her years and is always the first to offer help where and when it is needed. Her commitment and effort are faultless and she is a shining example not just for children, but also for the adults that she has tirelessly supported for years.

Outstanding Netball Club Award: Northants JMs (Northamptonshire)
Presented by: Sue Collin (East Midlands Netball, Regional Chair)
Northants JMs have not only achieved competitive success within the region this year, but they have also established a High 5 section, began delivering disability sessions in partnership with a local school, and have supported a number of coaches and umpires through their Level 1 and C Award qualifications. JMs provide opportunities to netballers of all ages and abilities, whilst growing their volunteer workforce, many of whom go on to be representative on the county and regional committees. Congratulations Northants JMs!

After all of the Awards were handed out, the afternoon was concluded with an abundance of prizes being given out in the raffle and the much anticipated quiz! 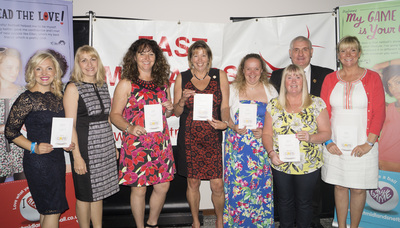 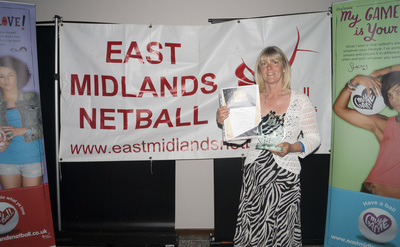 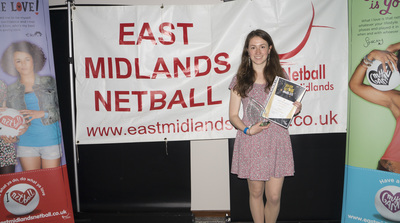 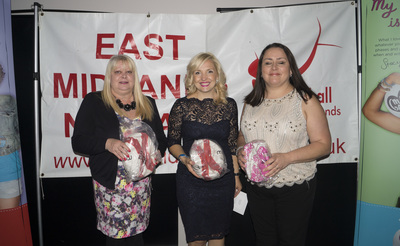 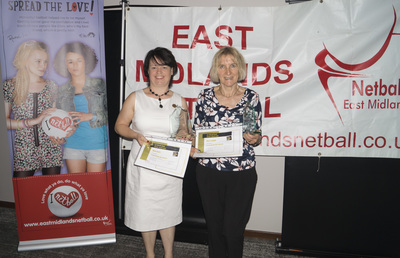 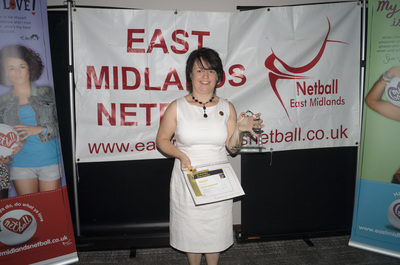 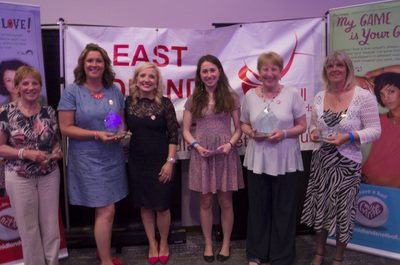 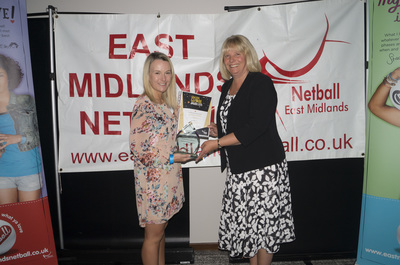 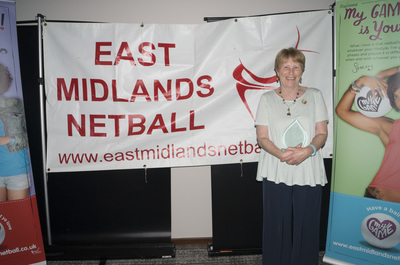 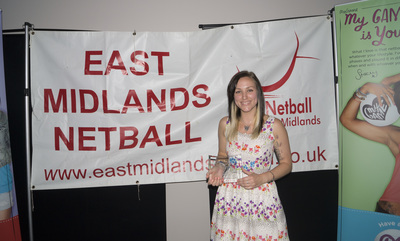 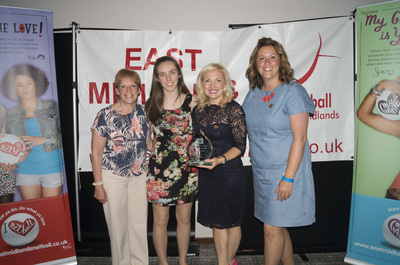 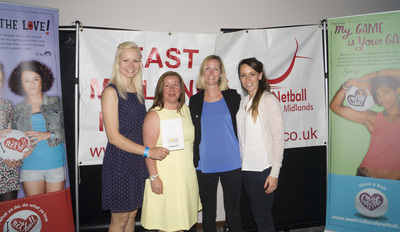 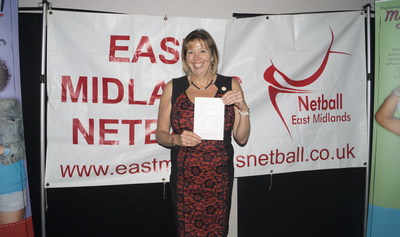 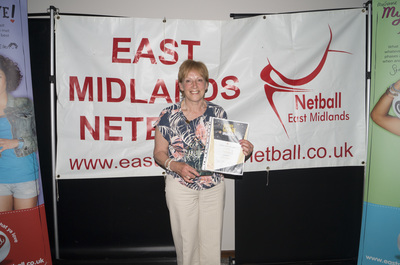 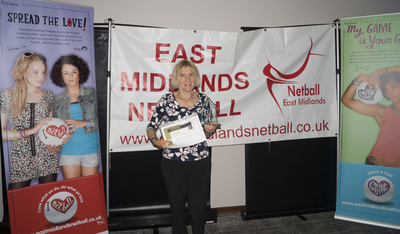 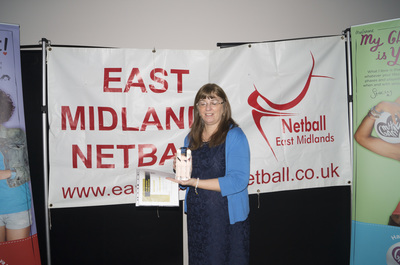 National Goalden Globes 2015
Winners of the regional Goalden Globe events came together on Saturday 19th September 2015 in Coventry to a glitzy affair to find out who had been awarded the national accolades in their categories.

We are delighted to announce the following winners from the East Midlands:

Huge congratulations go to all of our winners, and of course to every one of you who were nominated for an award. Our 2016 date has been set for Saturday 25th June….keep an eye out for the nomination process to make sure your nominations are included next year! 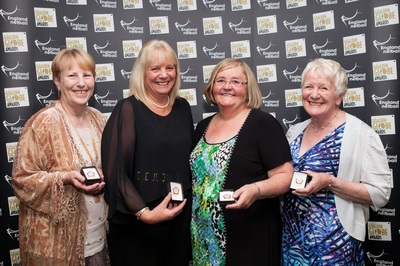 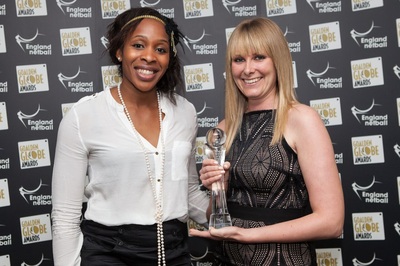 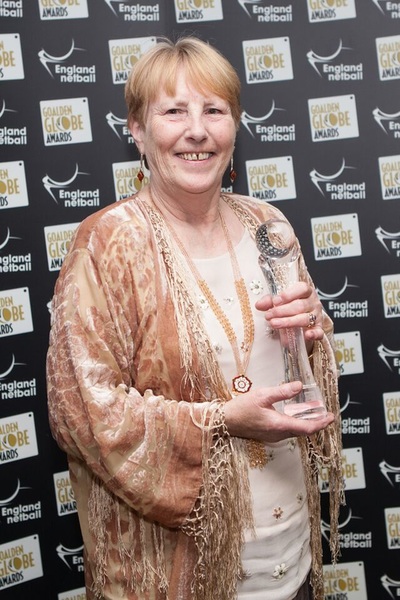 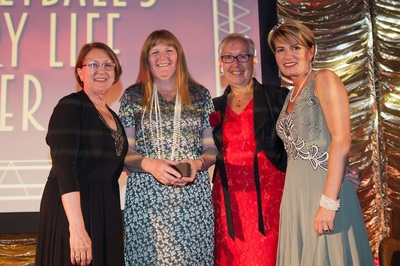